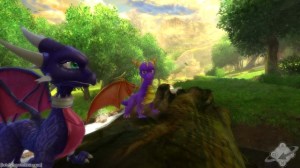 We do not own this image

It’s cold outside, the fire is roaring and there is nothing better to do then curl up and revisit our favourite couch co-op game – The Legend of Spyro, Dawn of the Dragon on PS3 (originally released on PS2). The music is calming, the fighting is fun and the “I’m out of ammunition” is hilarious!

Having enjoyed the RPG genre with XP and strenuous crystal finding, this game always comes back to top our list. We’ve taken it in turns playing as both Cynder and Spyro, also trying out the different elemental attacks each time we play it anew.

After countless play throughs for 100% (OCD much?) we’ve come to the conclusion that the best power for each dragon is:

After upgrading these elements to their highest level early in the game, the rest is a cinch! The fury option isn’t half bad either.

As a mutual agreement, our favourite level is the Valley of Avalar. We just load the chapter and play it when we want to escape, no need to keep continuing to the next level.

Unless it’s a long weekend and we have nothing important to do! Then we have to form a game plan (‘scuse the pun) of which eat-and-play snacks we’re in need of stocking up. Chips and dip is a given, but if it’s a cold day and we crave hearty food, generally it’s a bucket of KFC. NO REGRETS!